For the next two weeks, all children at Oakwood School in Chichester will commemorate the 100th anniversary of the end of The Great War, with the school participating in a host of activities to mark Armistice Day.

The school is building a new Oakwood War Memorial Garden which features a 'Tommy' silhouette from the British Legion's 'There But Not There' campaign. Children from Year 2 to Year 6 have each created beautiful red ceramic poppies to adorn the garden, providing a powerful visual reminder to children of the school’s local military connections, remembering members of the school community who gave their lives.

The youngest children are linking their curriculum studies with Chichester’s local community by building a Memory Box that shares anecdotes and photographs which recognise and appreciate the memories of elder family members and friends and their roles within wartime Britain.

The curriculum for older pupils will focus on many aspects of the war, ranging from investigating the vast effect on all the countries involved, to technology and the roles that animals played, as well as looking at how children’s contributions during the war effort were valued. A Year 6 Remembrance assembly will take place on the theme of poetry from Flanders fields.

Children will also be recreating an old tradition, remembered by many from the 1940s, 50s and 60s, of marking Armistice Day with a walk to St Mary’s Chapel, Sennicotts, to lay a wreath of poppies at the grave of Oakwood founder and decorated soldier, Captain Richard Fenn.

“The whole school is involved in honouring this anniversary and is deeply aware of the links it has with members of our school community, past and present, and the wider community here in Chichester,” said Oakwood Assistant Headteacher, Yvonne Lee, who has led the project. “All of our staff have been involved in researching this project in order to deliver a thoughtful and appropriate curriculum for children of all ages at the school.

“We are delighted that our new War Memorial Garden will form a lasting legacy as a peaceful place to visit, pay our respects and simply appreciate nature and beauty.”

Oakwood will be performing with other local choirs in ‘The Armistice Centenary Commemoration and Reconciliation Concert’ evening performance at Chichester Cathedral on Saturday 10th November. The school has also performed a concert of WWI songs with children from other local primary schools. 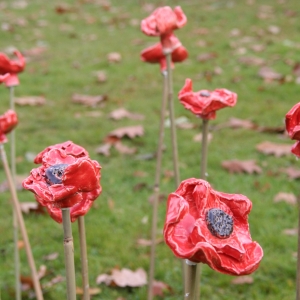 Thank you to all of our pupils for making this a term full of adventure and achievements. We hope you all have a gr... https://t.co/0R9HWH08nh

Thank you to the Gentle family who are selling their happy chickens eggs in the front hall of the Main House with p... https://t.co/MBkJhnelWs
View Twitter Profile