Oakwood School has been chosen as one of only four schools in the UK to be part of environmental charity, Challenge Antarctica, set up by former Royal Marine, Barry Gray.

Barry attended the school’s Speech Day to address the school community to talk about his aim next year of achieving the first ever solo unsupported and unassisted crossing of the Antarctica.

This feat of human endurance is aimed at raising environmental awareness among children everywhere in a fun and exciting way.

Children’s winning flag design to be planted in Antarctica

Oakwood Children took part in a competition to design a flag for Barry to take with him to plant in Antarctica. Barry announced the winning flag on Speech Day, which was created by 8-year-old Fred Clements, who is in Year 3 at the school. His design included a Union Jack and the Oakwood School crest.

Oakwood Head Teacher, Clare Bradbury, said, “Speech Day was a very happy occasion that celebrated the achievements of our pupils over the past year and was a wonderful way to end the year.  Barry Gray from Challenge Antartica inspired our children with a challenge to push themselves and head for their dreams.”

Media coverage included a visit by Spirit FM, the No.1 commercial radio station for West Sussex. Listen to the broadcast here: 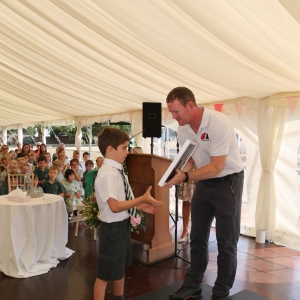 Nice window decorations for Mrs Bradbury to help keep her smiling (not that it is hard to make her smile)! Thank y... https://t.co/REycREUPA6

A few more lovely photos coming in. We hope the children are enjoying a bit of a rest this week. We will look forwa... https://t.co/YI2naj72l0
View Twitter Profile